I love my bed. Especially in the cold winter months! I only had one winter before this one and I cannot remember much, but I remember the cold.
Every morning when mom comes to say hello and open my garden gate, I bolt for the office! Mom always make sure I have a warm meal waiting for me!
This winter was a little strange. All the friends we had stopped visiting. Mom was telling me that they would return, but it seemed like it would never happen. My favourite toy, Lieutenant Dan, kept me company and we often had conversations, but it wasn’t the same as having a friend around. Especially since Lieutenant Dan seems to be getting smaller… Maybe it’s just my imagination.

Then one morning, mom said, “Annie, Mommy might have a friend for you for a little while…” She didn’t look too sure, but, at around lunch time the next day she brought home a ugly little black fella who smelled of hospital and was stinking a lot. He had almost no hair, and was looking very sad.
He was friendly enough though and I asked him what his mom calls him…He said he doesn’t have a mom and he didn’t have a name. This was OK, because before I came to be Annie, I also didn’t have a name or a mom. I told him not to worry, he would have both soon! He looked very sceptical, and sighed. He did that a lot!
I asked him how long he was visiting for and he also didn’t know. He was cold all the time and said he had a tummy ache. The First night he was here he didn’t want to jump on my bed, but slept in a small soft bed by the heater. He was scratching the whole night. When mom came to check on us in the night she just said “oh shame!”. Every time she would kiss me on my head and rubbed the little fellow’s head. She put some ointment on the little fella’s ears and on his tummy and then covered him again with a blanket. He was sighing a lot when she left. He said the stuff helped him not to itch and then did sleep for a little while.
When morning came we had some warm food. She looked at the little guy while he was sniffing in the garden and called him. “I will call you Morris,” she told him, “because you’re small and black”. She turned around and walked out of the garden gate and left us looking at each other.
“I guess you have a name now!” I nodded at him. He sneezed. Then scratched some more and tilted his head to the side, gave me a smile with three teeth showing and said; “I like it!.”
And so, days turned into weeks and we fell into a nice routine. Morris still scratched, and after the medicine from my Fairy Godmother wore off, he was back to scratching into the wee hours of the morning.
Mom took Morris to see my special friend, doctor Lize-Marié, and with medicine and food that smells yummy, his itch went away.
Morris now doesn’t smell anymore. He likes playing with me and runs like the wind! He even had a small operation done and stayed over in hospital for a night. It wasn’t fun. I missed him too much!
I had a talk with mom and asked if Morris can’t stay like I did. I will teach him stuff so he can work too. I didn’t think mom heard me, so I kept on telling her. So then, when I was sad because Morris wasn’t here, she said she think he could stay. Forever and ever so that I will always have a friend.
Fairy God-Mother wrote a long story about Morris’ new job. I think everyone likes his job, but It’s not as nice as mine! Now that Morris’ have clean teeth he often think he’s mom’s favourite, but I know he’s wrong. We both are. 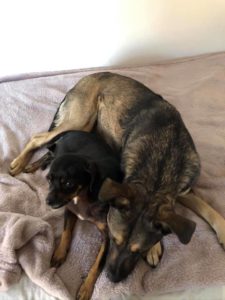