Mom says Morris’ name wasn’t an accident; it was meant to be. Just like the Lizard King, Jim Morrison, our Morris have a fondness for lizards, but not in the cute cuddly way. He hunts them. Day in and day out during his spare time not flirting with all the pretty girl guests, he goes out hunting lizards. He can stay dead still for minutes at a time and then pounce when the chosen lizard makes the first move. Mom doesn’t worry when we can’t find him anymore – we know where to go look. And we don’t look for Morris, but rather his tail. His tail sticks out like a police car arial on high alert.

With the preparations for our December holiday we had a lot of work going on. There was some painting which I helped with. It took mom two whole days to get all the green paint off my tail and some blue and pink from my front left foot and my bum. I like helping where I can, but the same can’t be said of Morris and Pikkie. They mostly just trot by and give whatever projects we are working on the side eye. Pikkie will sometimes walk with me and inspect all our handywork at dusk, but that is the best time of day for hunting according to Morris. This is when his prey tries to suck up the last bit of warmth from the bricks on the side of the house.

At nighttime after we’ve been tucked in and mom sang our goodnight song, we sometimes riminess over things that happened in the past few days… and the question always comes up: Did Morris catch any lizards today? The answer is always: “Mind your business” followed by a sneeze and a smile and Morris started babbling about paint and grass and petunia’s flowering and sometimes he mentions the cats teasing him. He doesn’t fool anyone. We all know that Morris haven’t caught a single lizard in all the many months living here.

One morning early mom woke us up. The big cleaning is starting today, and she wants to get a move on as Morris explains to the guests. Later in the day it became clear why mom was in a hurry. Clouds were gathering and looking angrier by the second and Morris and Pikkie made their thunder nest between the two big armchairs in the office. I don’t mind the thunder, but this was quite the storm. Morris kept his eyes closed and just kept saying: “Be gone! Be over!” and shook a little with every word. Pikkie isn’t scared of the thunder either but feels it’s his duty looking after his adoptive brother. Eventually it went away, and Morris is now starting to believe he’s got some magic powers.

The weather didn’t clear after the big storm, but produced one storm after another for a few days, in which Morris’ believe of powers became stronger with each storm. Then the rains started, and no matter how much our Morris whispered  for it to be gone and be over it just carried on and on and on. For days I had to listen to Morris wining about the rain and him threatening to just poop in the house, but luckily it didn’t happen. Each time there’s a little break in the rain we would run outside to check that everything was still in it’s place. Mom put movies on for us to watch again, but with all the water outside Morris and Pikkie didn’t want to watch Pirate movies again. “If it carrieth on raining like thith, the Cracken will come get uth from our Bedths!” Morris proclaimed a few times. Pikkie shook his head “Mom will never allow it!” he said with confidence and Morris believed him and calmed down a bit.

Eventually we woke up one morning and the sun was shining bright and cheerful. I did a few yoga poses on our porch and lay down to soak in the warmth. Morris flopped down against me and sighed. He lay on his back with his tummy in the sun and his tongue hanging out of the right side of his mouth.

The day was a lazy one with us mostly stretched out on clean fresh green grass – just sunning ourselves.

Late afternoon mom sat with us while our food cooled and was busy cleaning my ears when all of a sudden Morris jumped up and ran into some nearby plants. A lizard ran out, but not fast enough. Morris grabbed him and then, the unthinkable happens; the Lizard lost his tail and ran under a flowerpot. Morris got confused by the tail and jumped on it, but when it kept on moving Morris gave one loud scream and ran away. He ran straight into the office and into his “Thunder Dome” between the chairs. Pikkie and I went to check on the tail and it was still moving. Mom was laughing so hard the tears ran down her face. She went inside to see if Morris was OK and came out holding him in her arms. He had a sheepish grin on his face and didn’t want to look at the tail. Dad came out to see what the noise was all about and promptly named Morris The Lizard King.

“It was too grosthh, Annie!” he said that night when we were still laughing about the lizard Morris finally caught.

“I know how they work now” he said with a serious face. “Tomorrow I’m going to catch me another one…”

It was quiet for a while and I was thinking the boys fell asleep when I hear Morris whisper: “Thhlippy little thhuckerth”. And with that, he went to sleep.

My days are filled with entertaining our guests. I love telling them what to do for fun and where to go while they are visiting, but the part of my job I love the most is taking care of our Morris. 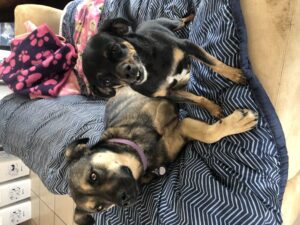 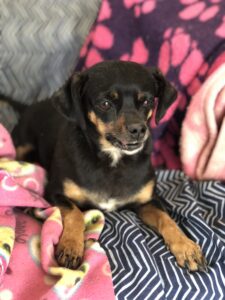 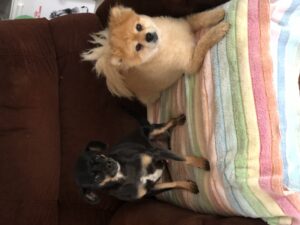